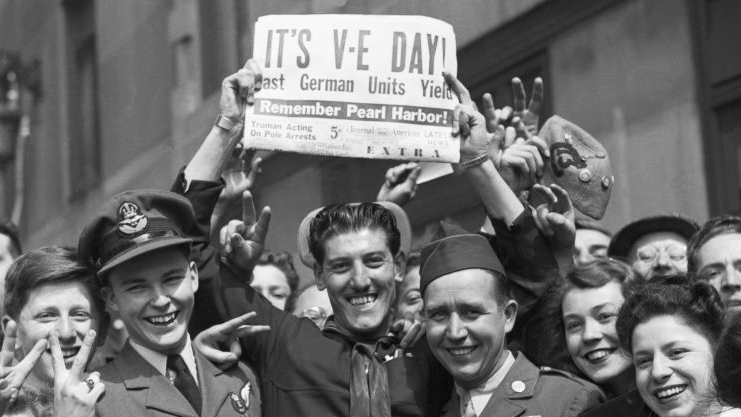 What is the V.E Day?

On  8th of May 1945 the Allies celebrated the defeat of Nazi Germany  and therefore it is considered the official day of the end of the Second World War in Europe.
This became known as V.E (Victory in Europe) Day.

Why did the World War Two start?

Germany was one of the countries involved in the First World War and when it finished, Germany and it’s allies had to sign a surrender act where it was stated that they were to blame for the conflict (that took place from 1914 to 1918).
They agreed to pay a fine and lose some of the lands they had acquired during the war.

Hitler ignored the agreement and started building an army; then he invaded Poland in 1939, despite warnings from other countries not to do so.

Great Britain and France supported Poland and declared war on Germany. This was the start of World War Two.

In 1933, the German people voted in favour of Hitler and the Nazis running Germany.

The Nazis believed that Aryans (people with blond hair and blue eyes) were the ‘master’ race, and that all other people were inferior.

Hitler wanted to eradicate ‘lesser’ people from Germany to make the country a world leader.

Which countries were involved in World War Two?

The countries against Germany were known as the Allies, and they were: Great Britain, France, United States, Greece, Australia, Canada, Belgium, India, Poland, South America, and many more.

The countries with Germany were known as the Axis, and they were: Germany, Italy, Japan, Hungary, Romania, Slovakia and Bulgaria.

When and how did World War Two end?

In the April of 1945, the Allies and the Russian overran Germany. On the 25th April 1945, Allied and Soviet forces met at the Elbe River: the German Army was destroyed.

On 7th May, the unconditional surrender of German forces was signed

Great celebrations took place across all of Europe and North America. In London over a million people celebrated Victory in Europe (VE) Day. Crowds massed in Trafalgar Square and up the Mall to Buckingham Palace, where King George VI and Queen Elizabeth (parents of Queen Elizabeth II – actual Queen), accompanied by the Prime Minister Winston Churchill, appeared on the balcony of the Palace to cheering crowds.

Amongst those crowds Princess Elizabeth (the future Queen Elizabeth II) and her sister, Princess Margaret blended anonymously, enjoying the celebrations.